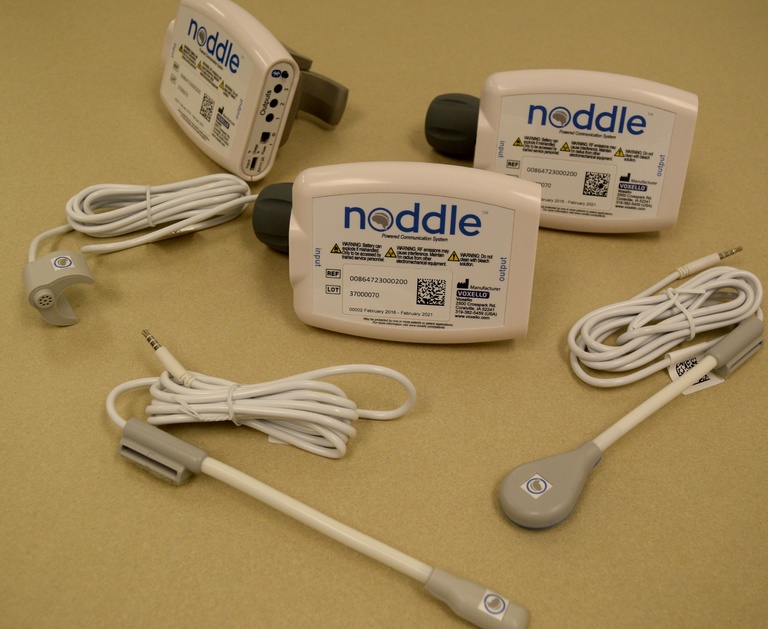 With an anticipated launch this summer of its signature invention—a device that allows patients with physical impairments to communicate with hospital staff—University of Iowa spinout company Voxello continues to draw significant investor interest while clinical trials are underway.

CEO Rives Bird said the company is marching toward closing out its $1.2 million Series A offering, the first round of financing offered to external investors, with more than $300,000 secured to date.

“We’re very, very close to being on the market,” Bird said. “Everything is hitting just right for us right now.”

Voxello’s noddle helps patients communicate with nurses and caregivers. With the noddle, patients who are unable to speak or are otherwise physically impaired can access nurse call systems, environmental controls, and communication apps on iPads and speech-generating devices. The noddle can be used with a touch or simply a click of the tongue. It is built for a hospital environment and has both wired and wireless capabilities.

In addition to netting a Small Business Innovation Research (SBIR) award of $150,000 March 30 that was matched with $25,000 from the Innovation Iowa Corporation, Voxello was invited to present on the noddle at the Iowa Biotech Innovation Showcase and Partnering for Growth Forum and the 3 Rivers Venture Fair in Pittsburgh.

Voxello was also among the nearly four dozen startups that pitched their ideas at the InvestMidwest Venture Capital Forum March 23-24 in St. Louis. The group seeks to provide access to equity capital for emerging, privately held companies seeking venture funds from $1 million to $20 million.

This year, the forum received more than 140 applications from companies that have developed products and services addressing many of the global issues making recent headlines.

Next week, Bird said, the company is meeting with investors with the Iowa-based Next Level Ventures.

“We couldn’t be happier with where Voxello is heading and how our team is performing,” he said. “Everything is happening as a result of our outstanding team efforts.”

Voxello was founded through the Iowa Medical Innovations Group (IMIG), a UI-based group that brings together students from the Colleges of Medicine, Business, Law, and Engineering to commercialize solutions to medical problems identified by clinical staff and faculty.