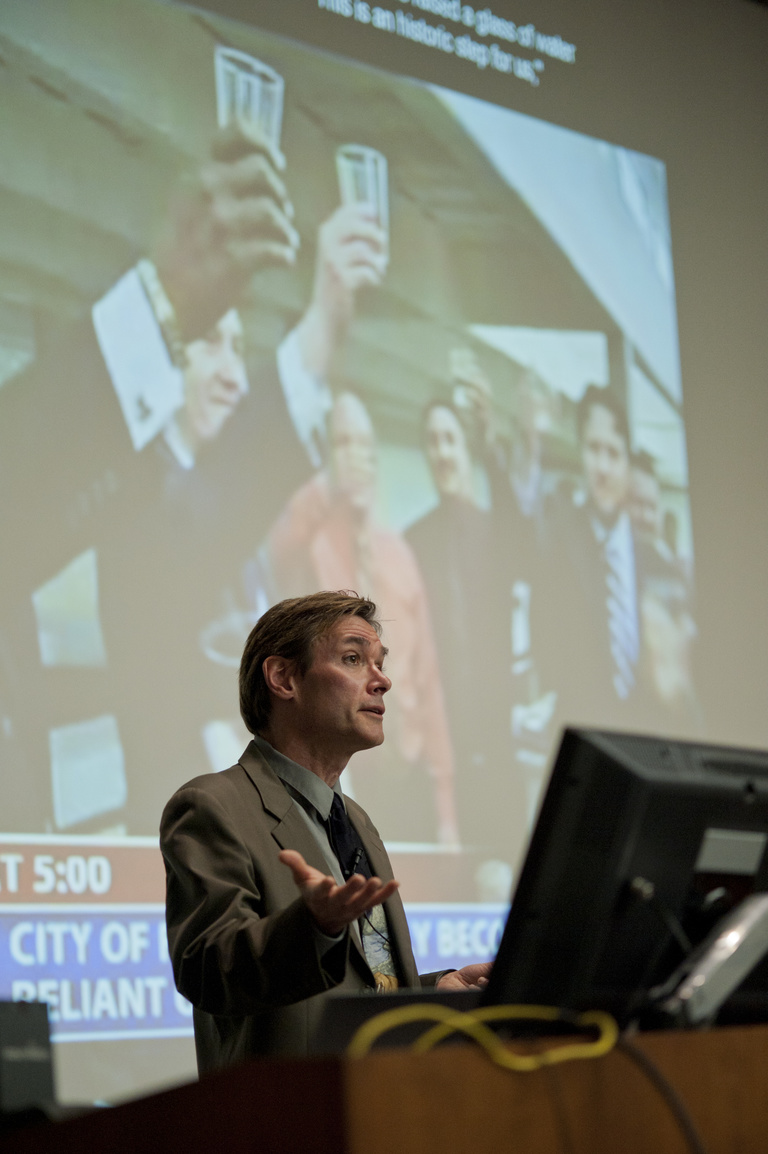 Edward’s frustration becomes clear as he tells the story of how he’s spent the past 15-plus years battling government science agencies, local utilities and state governments to provide clean, lead-free drinking water in Washington, D.C. and Flint, Mich. At the core, Edwards is most troubled by the “perverse incentives” and the “perversion of natural selection” at the governmental (and academic) level, promoting loyalty and reputation over truth and ethics, and leading to profound failures in protecting public health.

But first, he gave a brief history lesson on the dangers of ingesting lead.

The “great Roman plumber Vitruvius” in the 1st century BC was the first to document the effects of lead as a neurotoxin. Lead exposure is especially devastating to fetuses and small children; it causes miscarriages and stillbirths and, in the 1900s, lead pills were sold as abortifacients. Lead interferes with the physical and mental development of infants and small children, and can cause high blood pressure and kidney issues in adults.

Edwards was hired in 2003 by the local Washington, D.C. water utility to look at a sudden increase in pinhole leaks in D.C. water pipes. Suspecting a chemical problem was causing the water pipe leaks, Edwards tested the water and was shocked to discover that lead levels were astronomically high. Improperly treated water corrodes water pipes causing leaks and also can leach lead into the water supply.

“Twenty percent of D.C. houses with lead pipes were getting daily, in a single glass of water, more lead than was in a single turn-of-the-century abortion pill,” said Edwards. 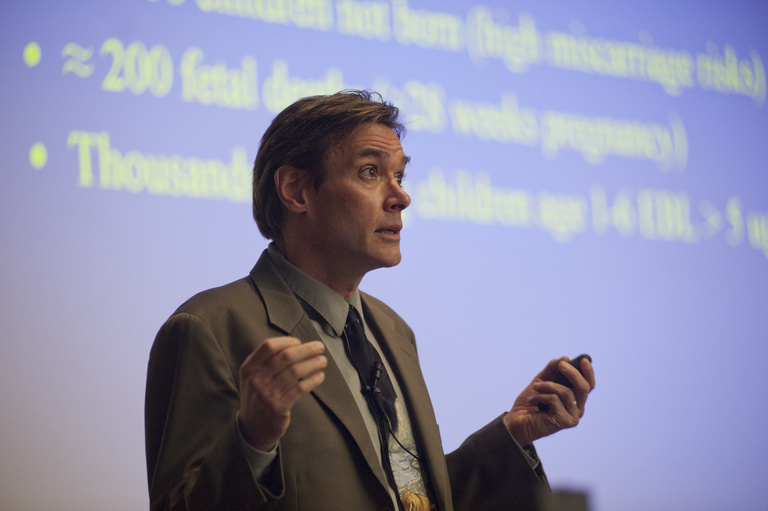 It later came to light, said Edwards, for three years the local D.C. utility, the EPA, and the Army Corps of Engineers all knew lead in the water was high and took no action. Edwards estimates that the exposure led to roughly 2,000 miscarriages, 200 stillbirths, and between 5,000-10,000 young children with irreversible neurological effects.

“What this is an example of is misconduct by government scientists and engineers. The environmental policemen we pay to protect us became environmental criminals and caused this massive, toxicological, unprecedented exposure,” said Edwards.

More troubling was the work done to mislead and cover up the misconduct, said Edwards, including a 2004 Centers for Disease Control and Prevention (CDC) report that suggested no D.C. resident had increased blood lead levels from this unprecedented exposure.

“Contrary to 2,000 years of human experience going back to the Roman times – thousands of peer-reviewed papers – this miracle happened in Washington, D.C.,” said Edwards. “The lie from this CDC report started to spread all around the country, and people started to downplay the dangers of lead in drinking water.”

Despite many roadblocks, Edwards obtained blood lead level data from a D.C. local hospital and in 2009 published a peer-reviewed scientific journal article demonstrating that high levels of lead in the DC water supply lead to high blood lead levels – directly contradicting the 2004 CDC report. Yet despite the evidence, said Edwards, there was no accepting of responsibility or actions taken to insure this wouldn’t happen again.

“No one ever thought scientists and engineers would behave this way with no profit motive whatsoever,” said Edwards. “Why Flint? I will argue to you, look, if this is how you run your government science agency where you promote unethical, weak cowards to the highest ranks of the agency and you destroy good, honest, ethical actors, what would you expect?” 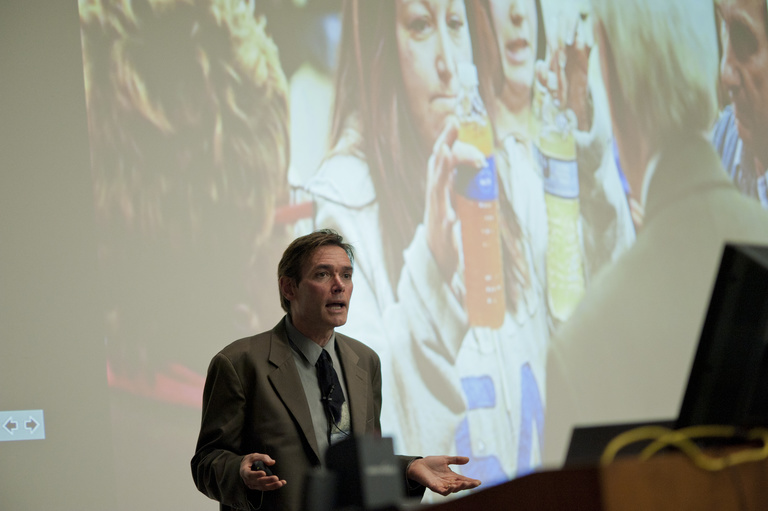 The Flint water crisis, said Edwards, was the result of water utilities realizing they could cheat on water quality standards, ambiguity over the dangers of lead exposure, and a workplace culture that promotes agency loyalty over public safety. And again, like D.C., the initial cause was an accident but the fix was fraught and too long in coming.

“The most powerful scientific force in the universe is mothers looking out for the health of their children,” said Edwards referring to Lee-Anne Walters, the Flint mother who led the community drive to find out the truth once one of her twin boys mysteriously stopped growing and started showing other signs of lead poisoning.

When the State of Michigan wouldn’t help her, Walters turned to an EPA water quality expert who was so troubled by the situation in Flint that he emailed his colleagues to suggest the EPA should exert emergency powers because Flint was in “eminent and substantial endangerment.” Long story short, this EPA employee was tossed under the bus.

Also troubling, said Edwards, was the suggested reason why EPA officials didn’t feel the need to get involved.

“I’m not so sure Flint is the community we want to go out on a limb for,” said Debbie Baltazar, the water division branch chief for EPA’s Region 5 in a Sept. 24, 2015 email that came to light during a later congressional investigation.

Though a series of behind-the-scenes actions, Edwards became involved in the Flint drama, ultimately independently testing Flint’s water and embarking on a massive public relations effort to shame and ridicule state and federal government officials into action.

“This is something you rarely ever do as a professor,” said Edwards. “We essentially declared war on our own unethical government scientific agencies and environmental policemen we pay to protect us. I didn’t want to do it. But it was either that or watch an entire city’s infrastructure be destroyed, and watch kids get poisoned, and [watch people] getting sick and dying from legionella.”

“I told my students: ‘This is probably a suicide mission. I may very well lose my job’,” said Edwards.

In the end, the water quality problem was solved in Flint though the effects linger on.

Also lingering is the question: what is the role of the academic scientist in promoting the public good?

Edwards told the story of how as a pre-med major, he asked Abel Wolman, pioneer of modern sanitary engineering, what is it that environmental engineers do.

“And he said, ‘If it weren’t for people like me, people like you would be dead.’ I hold that deep in my heart,” said Edwards. “What we do as scientists and engineers is important. People drink the water we produce. People use our research one way or another.”

Despite pushback from some corners in the academic world, Edwards argues strongly for the academy to use their specialized knowledge to actively impact change in the real world. Over the past year especially, he has become more vocal in decrying academia’s own “perverse incentives” that, he claims, reduce scientific progress, encourage unethical behavior and ignore injustice. In September, Edwards published a journal article in Environmental Engineering Science outlining the structural problems in academia that he fears are producing the same lack of moral courage he observed in the government scientific agencies that failed the people of D.C. and Flint.

“When people ask me what makes me do what I did in D.C. and Flint, I will say to you that it is shame,” said Edwards. “I am ashamed that it is because of people like me that those folks in Flint, Michigan are dead. It makes me sick that this happened in a profession I love and we as academics cast a blind eye through our cynicism and willful blindness when this sort of thing happens around us.”

For a full listing of other events in the 2016-17 Creative Matters lecture series, please visit https://creativematters.research.uiowa.edu/.

The Creative Matters lecture series seeks to demonstrate that creativity is not only at the core of all research and discovery, but is also central to our human experience. The lineup of invited speakers includes artists, thinkers, builders, and doers who challenge conventional thinking about creativity, science, and artistic expression, borrowing from a range of influences and disciplines in their work.