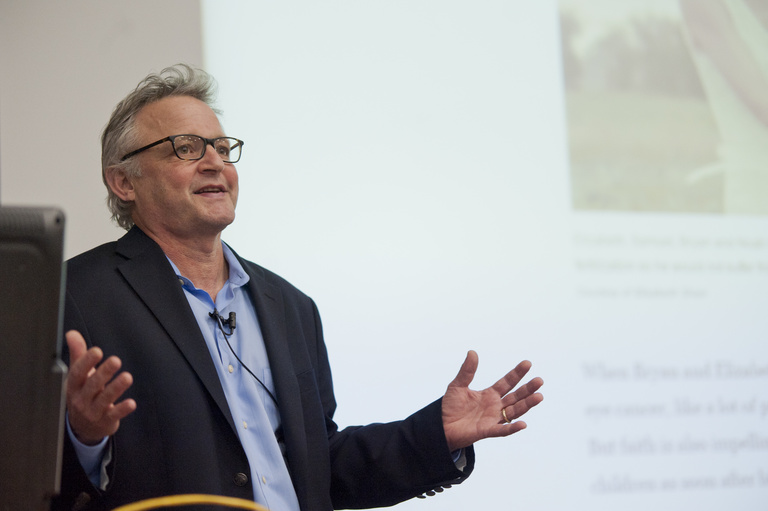 “Pedal if you love NPR,” NPR science correspondent Joe Palca shouted to fellow RAGBRAI cyclists when he and a group of other NPR reporters rode the famous Iowa event in 2015.

One NPR lover was University of Iowa Visiting Assistant Professor Julie Reynolds, jointly appointed with the UI Public Policy Center (PPC) and the College of Dentistry and Dental Clinics. Her RAGBRAI riding group, Team Groucho, joined forces with the No Pie Refused (NPR) RAGBRAI team that year, and Reynolds hosted both teams for the night in her home when they came through Coralville, Iowa.

Ultimately the connection forged over scenic Iowa highways and many (many) slices of pie led to an invitation from the UI Public Policy Center to Palca to deliver the joint PPC’s Forkenbrock Series and Creative Matters lecture on Nov. 16.

Palca hosts NPR’s “Joe’s Big Idea” where, rather than reporting on obscure studies or what’s been cured in mice that week, he shares stories of the scientists themselves. What drives them? What role does creativity and intuition play in leading them to scientific discoveries?

In his lecture on the UI campus, Palca pointed out the problem with the traditional way of reporting science news, shared a number of stories from “Joe’s Big Idea” that illustrate “… the story of the serendipity of science,” and called for academic scientists and journalists to reconsider their roles in communicating with the public about scientific research.

After years as a science journalist, Palca was frustrated by how science tends to be reported by the media. He pointed out that in 2004 only six minor news sources in the world reported on a journal article that won the authors a Nobel Prize in 2010. 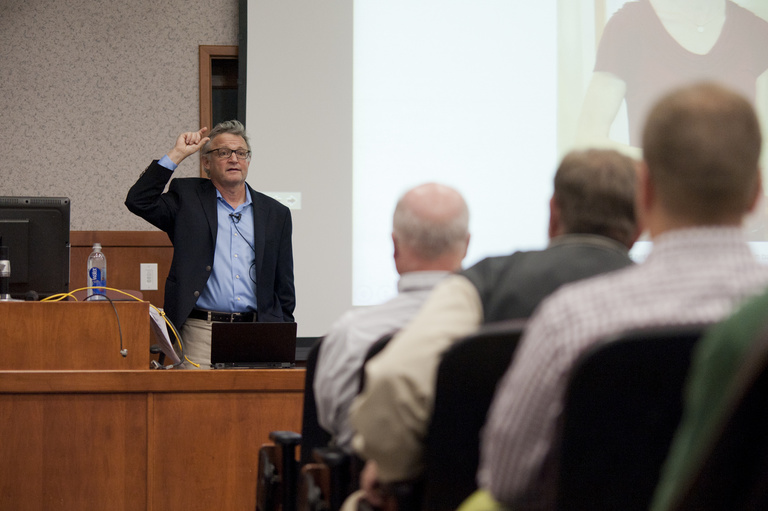 “My point is we don’t know most of the time what is the really big story,” said Palca. “You can’t run into the newsroom and say, ‘Hey! Five years ago a really important paper came out!’ Unless it wins the Nobel Prize, in which case they do want to hear about it five years later. The news quality of science news is sometimes a little obscure.”

Palca’s answer to this problem was “Joe’s Big Idea.”

“Everybody thinks I’m having big ideas all the time but mine was one big idea, which is to change the way we tell science stories in the media. It means I tell stories about people and process. And in the last four years I have done what for me are the most memorable stories I have done.”

He shared a few of those stories at the Creative Matters lecture. The first was about chemist Bryan Shaw who was developing an innovative new way to diagnosis eye cancers in children after his son Noah lost an eye to retinoblastoma. Palca talked about the importance of humanizing the scientists while not overwhelming the audience with the heavy emotional impact of the story. He also didn’t shy away from reporting the religious faith that motivates Shaw, which Palca said stunned him.

“You could say that I’m part of the godless media but what it really meant to me was, I talk to a lot of scientist who just think that science and religion just don’t go together and I’m here to say that they can,” said Palca. “Because he’s as serious a scientist that you could ever hope to find, and he’s quite capable, but he’s also an incredibly devout Christian, and we’ve had some interesting arguments about how that works.”

Palca also recounted the story of pediatric oncologist Jim Olsen, who is developing a substance called “Tumor Paint” that is delivered through the blood stream and gravitates to tumors. The paint “lights up” the tumor, allowing the surgeon to focus on removing the diseased tissue and reduce the risk of potentially significant surgical side effects. That in and of itself is a tidy little science news story, but Palca took it deeper by asking how Olsen has the emotional fortitude to constantly witness the deaths of children throughout his career, despite his best efforts to save them. 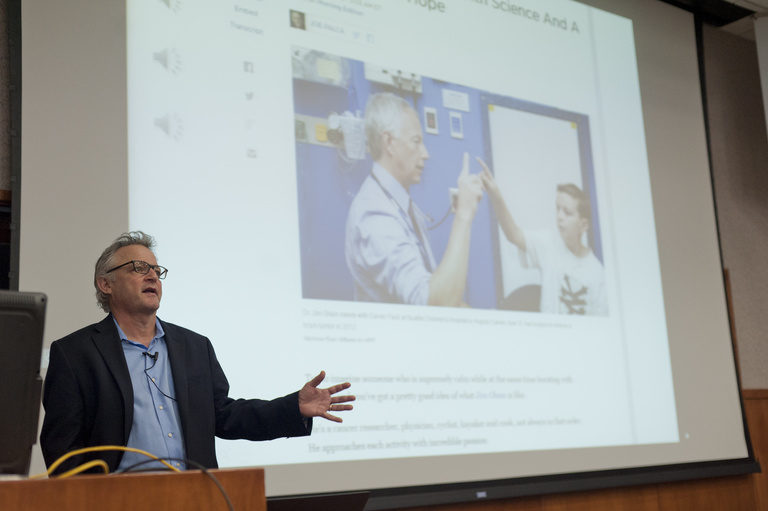 In the radio clip Palca played, Olsen described how early on he discovered that he had a gift for helping patients and their parents navigate the end of life and that, “Live doesn’t have to be 90 years [long] to be beautiful.” His sense of purpose toward his patients, uncoupled from death equals failure, has released him from what could have been a tremendous burden. This freedom, Palca suggests, has allowed Olsen to unlocked great scientific advancements in the treatment of pediatric brain tumors.

“He speaks so beautifully and compellingly,” said Palca. “When you have that ability to articulate what makes you tick, that’s great. That’s what ‘Joe’s Big Ideas’ is about.”

In the lively Q&A after the lecture, Palca made the case that the media and scientists both have a responsibility to share scientific knowledge with the public.

“[Journalist should] stop treating scientists like experts and start treating them like people,” said Palca. “I’ve done this long enough to know that scientists are not comfortable being people, especially in front of the news media. Because their colleagues are going to say, ‘You idiot. You sounded like a real person.’ The trouble with scientists have is that they have a really hard time getting away from the fact that they are not talking to their peers. They are talking to the public.”

But back to RAGBRAI.

“After Scott Horsley and Don Gonyea rode it [I thought], oh, now I am out of excuses,” said Palca. “They told me, ‘We’re thinking about joining forces with this crazy group from Iowa that we met one year and I don’t know what it’s going to be like.

“It was a life-altering experience,” he said.

For a full listing of other events in the 2016-17 Creative Matters lecture series, please visit https://creativematters.research.uiowa.edu/.

The Forkenbrock Series provides a forum for dialogue about policy areas from applied, academic and interdisciplinary perspectives. The series was established in honor of David Forkenbrock, a nationally recognized transportation researcher. Forkenbrock established the PPC at the University of Iowa in 1987. His vision was to enable public and private sector decision makers to work with faculty, staff and student researchers to explore solutions to complex problems related to the public interest.

The Creative Matters lecture series seeks to demonstrate that creativity is not only at the core of all research and discovery, but is also central to our human experience. The lineup of invited speakers includes artists, thinkers, builders, and doers who challenge conventional thinking about creativity, science, and artistic expression, borrowing from a range of influences and disciplines in their work.