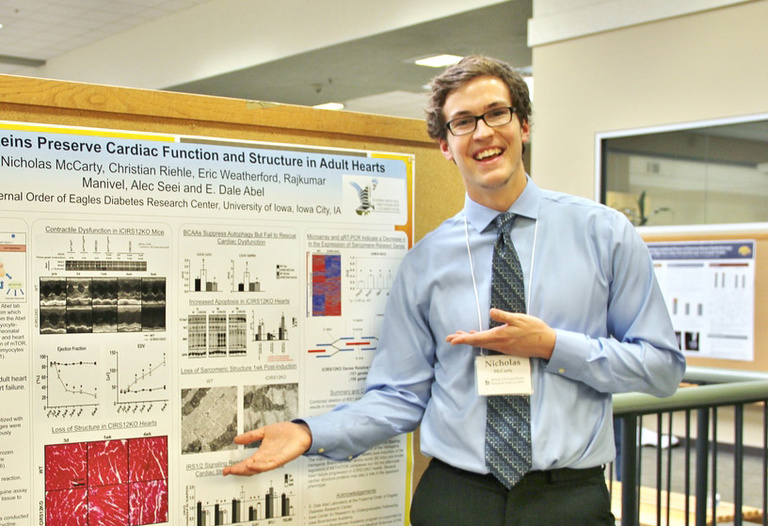 This week, University of Iowa senior Nicholas McCarty is in Washington, D.C. at a specialized science policy and advocacy workshop hosted by the American Association for the Advancement of Science (AAAS). McCarty’s participation is sponsored by the Vice President’s Office for Research and Economic Development.

A biochemistry and microbiology double major, McCarty joined Dr. E. Dale Abel’s laboratory in the early weeks of his freshman year – drawn by Dr. Abel’s passion, generosity, and competence. McCarty’s honors thesis on diabetes research grew out of his early exposure and mentorship in the Abel Laboratory. The Geneva, Ill. native is also active in the Iowa Center for Research by Undergraduates (ICRU). McCarty was nominated to receive the grant by Adjunct Associate Professor of Psychology Bob Kirby.

The AAAS Catalyzing Advocacy in Science and Engineering workshop is designed as a program for undergraduate and graduate students who are eager to learn about the role of science in policy-making, introduce them to the federal policy-making process, and empower them with avenues to become a voice for basic research throughout their careers.

The program includes a mix of classroom and interactive learning, and concludes with an option to form teams and conduct meetings with students’ elected members of Congress and congressional staff.

“Being able to sit in front of people who can make a larger difference than you – like a congressperson – is something that you have to know how to do as a scientist,” said McCarty. “I envision myself in my future career doing this all the time. This is a great opportunity.”

McCarty’s scientific future is already looking bright. He recently found out he has been awarded the Fulbright-Imperial College London Award, where he will pursue a one-year Master’s degree in systems and synthetic biology, working in the College’s Department of Bioengineering and the Centre for Synthetic Biology and Innovation (CSynBI).